You are here
Home > FOOD > Tabbouli, Unique Salad with Pomegranate We think of Tabbouli as a bulgur salad with lots of parsley and mint. But real Lebanese Tabbouli is a lemony herb salad with a little bit of fine bulgur, an edible garden that you can scoop up with romaine lettuce heart leaves or simply eat with a fork. In other word Tabbouli is a Mediterranean salad made with lots of fresh parsley, chopped tomatoes, cucumber and a lemon juice and olive oil dressing. Actually in the Middle East, Tabbouli as it not always understood in the west, is all about parsley ;this is essentially a parsley salad, not a bulgur salad.

Other herbs in Tabbouli salad :

Mint is a feature of many recipes, albeit in thankfully smaller quantities. Even more delicate than parsley, it needs stripping from its thicker stems and gently slicing. A ratio of about one part mint to four parts parsley seems most usual, and seems about right -you should be able to pick up the fresh, menthol flavor without it detracting from the pepperiness of the parsley.

Tabbouli exists in various guises in Turkey, Greece and the Middle East, any which way, it is a salad made from wheat, and varying degrees of herbs and vegetables. 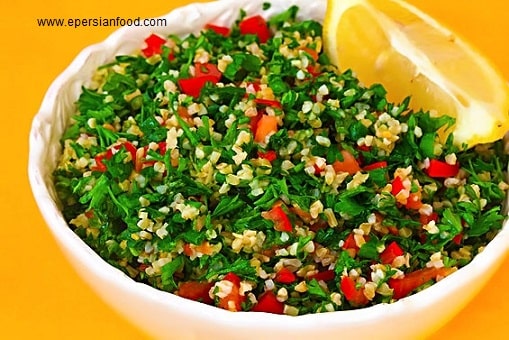 How to make a delicious Arabic Tabbouli Salad with Pomegranates:

One and a half cups wheat bulgur

Salt and pepper to taste

To make Tabbouli salad, which is a popular Arabic salad, first pour wheat bulgur in a bowl and add some boiling water and sprinkle with a little salt and let it soak for 30 minutes to 1 hour.

Then drain the bulgur off, rinse with cold water and allow excess water to come out. Wipe and wash the parsley, mint and green onions and chop them on a board with a knife and wipe the head of the leek and then chop it with the vegetables mentioned above.

Rinse the celery stem and shake it to avoid water, then cut it with a knife on the board. Cut the pomegranate and hit the pomegranate skin firmly with the teaspoon until the seeds come out.

A propper Tabbouli should be very finely chopped -but not crushed. The herbs should remain crispy. It is therefore important to use sharpest knife you’ve got, and remember to allow the knife to glide a little instead of pushing through the herbs ;It will make them mushy. There are a lot of herbs in this recipe, so do them a little at a time. It is said that a young girl’s ability to chop herbs for Tabbouli was an important quality as a potential housewife in the region. While perhaps one would wish such sayings had no roots in reality, it does suggest just how important both Tabbouli and the chopping of herbs for it is in the Middle East.

Tabbouli is excellent if you’re serving mezze, or as a side to meat or fish. The clean flavors make it a great palate cleanser.

For a mare traditional variety, double the tomatoes and lemon juice and skip the pomegranate seeds and pomegranate molasses.

If you like you can add some ground allspice and cinnamon for a more spiced flavor.

Dietary Fats: Know What Is Good Fats and What Is Bad Fats?

Get the wedding reception you want with a first-rate caterer

The Right Set of Medicines in the Best Conditionals and Discounts